The art of the cocktail

Mixology is as much a science as an art form, where the cocktail is an ephemeral creation designed to be admired and enjoyed.

Mixology is the science of amalgamation, the art of producing the perfect elixir. Some liken it to liquid gastronomy. As with all disciplines, there are different specialties and levels. At its foundation is classic mixology. Then you have cryo-mixology, involving spectacular vaporous concoctions made with liquid nitrogen. At the pinnacle is molecular mixology, which transforms bars into veritable laboratories for stunning innovations.

Several MGallery bartenders have already told us about their career path, passion and vision for the profession. Here are five recipes that illustrate and highlight our mixologists’ many talents.

Located in the heart of Toulouse, the bar at La Cour des Consuls revisits the city’s most emblematic references

This superb 18th-century hotel is an iconic rendezvous point in Toulouse, the 'Pink City' that inspired the lounge bar’s signature cocktail.

The drink is named after the great Toulousain singer–songwriter, Claude Nougaro, and its color evokes the rosy brick façades of this southwestern French city. It combines Armagnac made from local grapes, the fresh zing of mandarin oranges and the sweet “violence of violets” – a reference to both a line in the native son’s famous song 'Toulouse', and a liqueur made from the purple flower that was the region’s source of wealth in the 1800s. All of Toulouse in one glass. 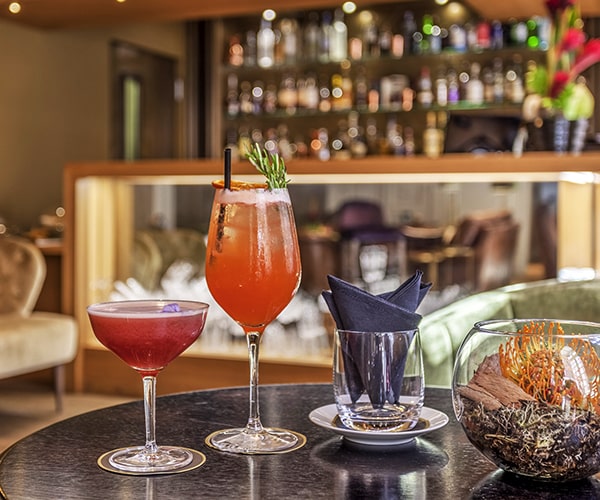 Facing Dinard’s bay, MGallery Royal Émeraude is an invitation to travel – back in time. Just take a look at the bar’s décor, complete with a counter fashioned from the gondola of a hot-air balloon.

From The Antilles to La Réunion, vessels from Brittany have crossed every ocean, and Time Travel is Le Darling’s response to the eternal call of the open sea. This striking cocktail is made with Malibu liqueur, Alain Milliat apple juice, a squeeze of lemon and housemade syrup – all topped with a light layer of foam and lemon zest. As for the “secret ingredient,” it’s the superb gin made right across the bay in Saint Malo. This is a cocktail designed to thrill your tastebuds. 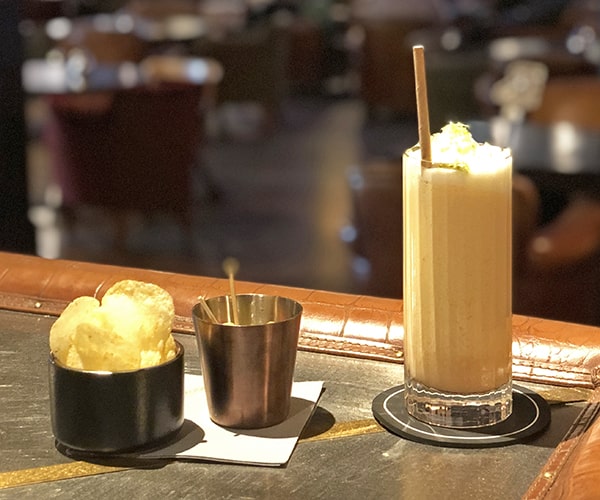 Le Carlton, inspired by you

A precursor of the MGallery initiative Inspired by Her, Carlton Lyon creates a light and festive cocktail

What better way to celebrate a rebirth than with a toast? The signature Carlton cocktail commemorates the hotel’s total makeover, completed in 2013. But this sweet, berry-filled drink also acknowledges how Carlton Lyon was the precursor to MGallery’s Inspired by Her program.

With this elixir made of Champagne, Chambord liqueur, strawberry purée and raspberry nectar, we raise a glass to women who travel. But men are more than welcome to enjoy it, too!

Bohème Champ, a cocktail between land, sea and sky

A bohemian-chic cocoon just a short walk from La Croisette promenade, Cannes Croisette Beach overlooks Île de Saint Honorat, the island where monks from Lérins Abbey distill a divine liqueur made with mandarin oranges grown on the premises. In the legendary French Riviera city that lies on the other side of the Bay of Cannes, so close and yet so far, Champagne flows freely.

These two worlds unite in the Bohème Champ (Bohemian Field), which is best enjoyed while relaxing on the lush patio extending from the lobby. This cocktail is at the heart of the hotel’s Memorable Moment: a magical dinner on the private beach. 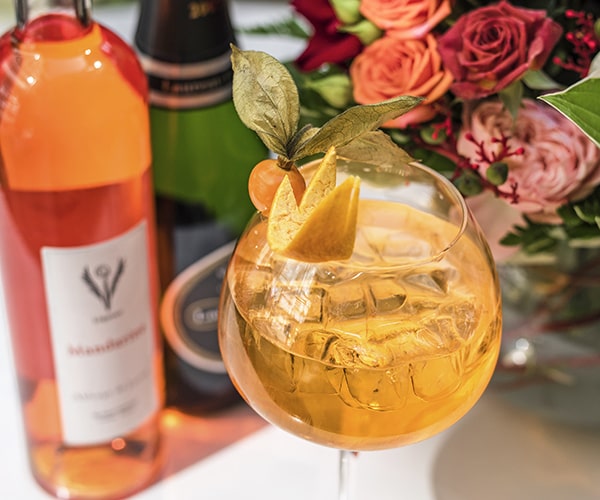 The Sainte-Barbe seems to stand alone in this land of extremes. To get the full experience, head to the hotel’s vast roof terrace.

Looking at its raw natural beauty and pure lines, it is difficult to imagine that the history of MGallery Sainte-Barbe dates back to the 17th century. Though the hotel is just on the edge of Le Conquet’s charming downtown, between the beach and marina, the open architecture of this former guardhouse hovering over the Atlantic feels like the end of the world.

In fact, the signature cocktail takes its name from Penn-ar-Bed, which means Land’s End (Finistère) in Breton. Its base is French whisky from Brittany, a spirit with the woody notes and briny undertones that are so characteristic of this region. The ideal place to savor a Pen’ar Bed is on the hotel’s enormous panoramic rooftop. But if braving the elements on the open air terrace is too intense, the view from the spa’s bay windows is just as spectacular. Or, you could just cozy up in front of the fireplace in the book nook. 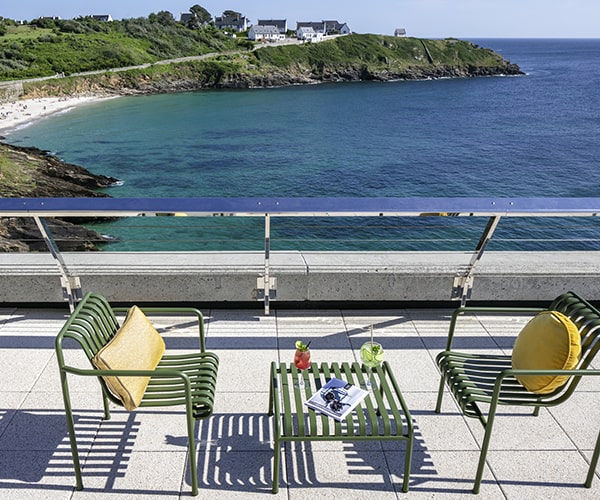