Women are at the heart of the Inspired by Her wellbeing offer. And because true wellness starts with good health, MGallery proudly sponsored the 26th annual Pink October – a month of hope and awareness.

With its annual Pink October campaign, the association Le Cancer du Sein, Parlons-en ! (Breast Cancer, Let's Talk About It!) strives to raise awareness and money for research. From the Odysséa races to the Eiffel Tower lit up in pink, the events organized throughout France are all small victories against a disease that affects one in eight women. This is a cause near and dear to MGallery, where we take every care to lavish attention on our guests. Design by women – for women travelers.

Our teams went beyond themselves to raise awareness among our guests and associates.

True to our values of wellbeing and art de vivre, MGallery partnered with the brand Chic Des Plantes ! to offer 100% organic detox rose tea. For each teabag sold, €2.50 went toward breast cancer research. Guests who don't drink tea were also able to participate with each stay between 1 and 31 October donating another €1 to the cause.

The association Le Cancer du Sein, Parlons-en! (Breast Cancer, Let’s Talk About It!) made available a brochure containing important information about the disease and how to prevent it, including screenings. And thanks to Marie Claire, which publishes a pull-out section on this topic each year, both our guests and team members were able to discover more about the journeys of women who have beat cancer. This monthly magazine and the Estée Lauder group were responsible for creating the association and launching Pink October in France 25 years ago. And because prevention begins with visibility, a pink ribbon adorned MGallery uniforms for a month as a sign of support. 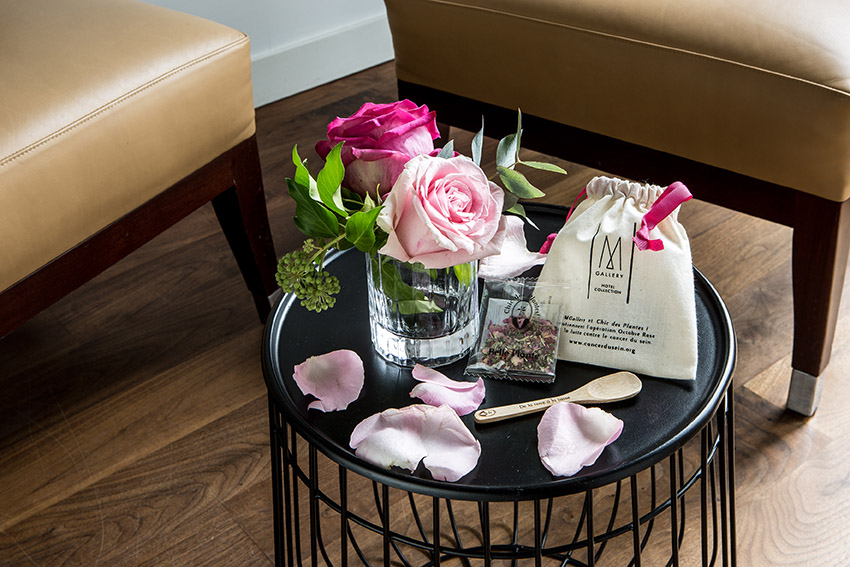 From Paris to Toulouse, an array of local initiatives

The teams at MGallery hotels initiated numerous campaigns to educate and to raise awareness and money for various organizations.

For the monthly meeting of Les Baigneuses du Molitor (The Lady Bathers of Molitor), the Parisian hotel with the legendary swimming pool put on a special soirée wherein all the proceeds were donated. The writer Elsa Wolinski, the journalist Géraldine Dormoy and the founders of MÊME, the first cosmetics brand designed specifically for women affected by cancer, led a roundtable discussion about the disease and its impact on women's lives.

All for a good cause, the guests at Grand Hôtel Roi René Aix-en-Provence were able to order a Pink October cocktail and main course. And in Toulouse, the spa at La Cour des Consuls offered special sessions of yoga, shiatsu and reiki, as well as an Afterwork Manicure & Champagne. To your health!

The creativity and inspiration of the teams went far beyond these examples. From hotel façades all lit up in pink to the gathering of influencers for chic makeovers, each venue did their utmost to give Pink October the visibility it deserved.

From ribbons to running bibs, let's hear it for the dozens of Odysséa race participants from MGallery

All MGallery team members sported a pink ribbon on their uniform during October, but some literally went further by donning a race bib – pink, of course.

Staying ahead of cancer is perhaps the best way to beat it, which is why hundreds of people came together and ran for the worthy cause. Organized in about 15 French cities, the Odysséa races raised funds for 100 associations united against breast cancer. Adélie Fradin looks back at the event in Paris:

“I was really struck by the group's energy during the race, the mutual help among runners and a sense of unity,” the Brand Manager said. “I felt we were running together for a common cause, and not against each other. This cause has personal resonance for me, but it is the collective spirit of the race that I will always remember. I would gladly do this again next year!"

I felt we were running together for a common cause, and not against each other. 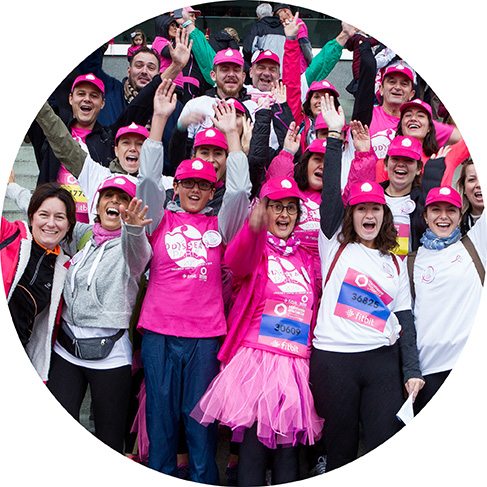 For Gaëlle Grelat, the experience was just as intense. “Excitement filled the air even before the race began. There was this incredible line of cars when we arrived in Vincennes, which really put us in the right mood, like a teaser. Everyone was thrilled to be able to participate in this race for the cause and, beyond that, to be able to live this moment together. Among the participants, there was a caring atmosphere and a special motivation – the desire to do well, to be there.”

The director of the Paris Bastille Boutet hotel agreed. “I’m not a great athlete, which is why I was delighted to make it to the finish line! I was so proud of myself, my son and all the members of my team that participated. It'll make good memories of shared moments. We were all fired up at the starting line despite the rain, and encouraged by the sun at the end of the race. We’ll be there next year for sure!"

Why not join them and all the other participants next year? In the meantime, you can find images of all the MGallery Pink October partnership events on our social network sites.